The Fishing Fleet at St Peter’s

St. Peter’s in Folkestone was built for the Fisherfolk and Port of Folkestone in 1862. Strange Cargo invited me (and 19 other artists) to illustrate a short account taken from their research into archives, stories and historic events connected to the fishing industry in the town. The story that accompanied my brief (Amelia Rose, FE77, Fishing Boat Disaster, Run Down by American War Ship, Two Folkestone men lost) was the inspiration for my artwork.

My work, printed and glazed onto a porcelain tile, is on permanent display in the area of St Peter’s church dedicated to the fishermen (The Vicarage, North Street, Folkestone). 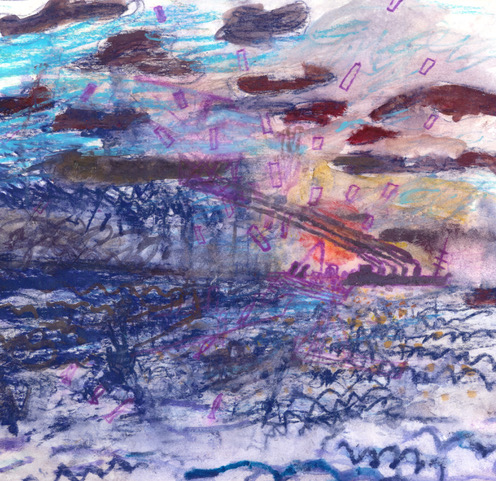 Run Down by American War Ship

(article from Folkestone, Hythe, Sandgate and Cheriton Herald. 17th May 1919)

Just about down on the morning on Thursday, the motor fishing board Amelia Rose FE77 left the Harbour with crew of four steering direct for the fishing ground on the Varne Ridge. The trawler (one of the largest in the Harbour) had reached a point between three and four miles off the shore between Folkestone and Dover, when suddenly an American destroyer, which is said to have been going at a high speed, crashed into the little craft, with the result that it was smashed to pieces. The crew were precipitated into the water. Two of these were rescued by the warship which circled round the scene of the disaster for some time in order if possible to save the other two. But these men were probably killed outright by the impact. The steamer struck the boat on the port side. The cred consisted of the skipper and owner William Hart (saved), Albert Hart (saved), Edward Hart (lost), and James Harris (lost). The former three were father and sons.

Signals of distress were made, and these attracted other boats to the vicinity large steamer was seen to be circling about. She subsequently proceeded on her way. All that could be seen of the trawler was shapeless mass of wreckage, and some of this, including the mizzen mast and spar, were towed into the harbour.

Mr. Richard Adams, with his usual proptitude, wired promptly to official quarters at Dover in order to pick up any information that might be available. All that could be heard was that the coastguard had seen signals just about daybreak from a fast going steamer which they thought might be an American destroyer.